This is a place at the exhibition where the artistic and sociological parts of U.S.E are combined. It’s a creative environment for real-time exchange about Europe today. In ‘the lab’ you can see interviews with people from all over Europe, you can interact and share your points of view and you can see 3D visualisations.

As Europe can mean so many different things from the perspective of political powers, business ‘markets’, large and small countries, nationalities, as well as families and individuals, the approach is to explore to the complexity of European identities as an interplay of historical, demographic, geopolitical, economic and cultural concepts.

I encourage the project’s title to be interpreted not only through its politically-coloured meaning (a state as a country), but also through its more abstract meaning – at least in English -, i.e. a state as a condition/status. 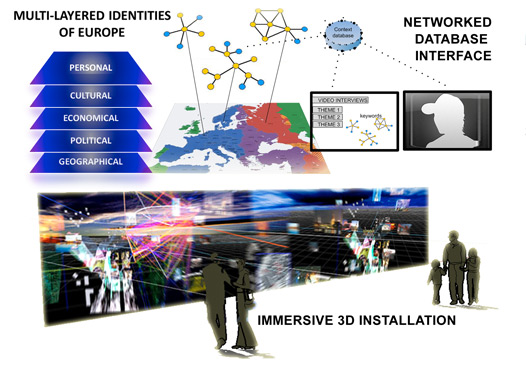 The workshop participants, on-site as well as online, can submit their reflections as text messages, images, and even video sequences. The laboratory will feature several interactive screens and projections, webcams and computer terminals for short text input. It will act as a temporary virtual embassy of the United States of Europe, connecting U.S.E exhibition venues with satellite events and locations. Thus, the laboratory works as a ‘processing device’ – that travels from place to place and adapts accordingly – that will collate the co-creators’ and visitors’ input, and manifest itself as a self-organizing map or overview, offering multiple layers for exploration, and becoming – through immersive 3D visualisations and sonifications (featuring also computer generated stereoscopic projection and multi channel audio) – an evolving multimedia artwork itself.